The Soul Center Yoga offers classes in the ancient art and science of Kundalini Yoga. • Learn to relax, meditate, and enjoy being still • Learn to let go of the stress you’re holding • Learn to heal your body and mind with your breath • Experience states of transcendent consciousnesss Types of Yoga Classes available at The Soul Center : Private Yoga Classes available at the Studio or in your own home. coque iphone 2019 Private Group Yoga Classes available at the Studio or in your own home. Group Yoga Class at the Studio, please see Schedule page for days and times. Children’s Yoga Classes, please see Schedule page for days and times. Healing Workshops in Sat Nam Rasayan, an ancient healing art. Prenatal Yoga Classes available at the studio or in our own home (Private or Group classes) Come Visit Yoga by the Sea, a Yogic Boutique Offering : Books (On Health, Healing, and Yoga Manuals) Gifts, Candles, and Soaps Cards and Incense Yogic Music (CD’s Tapes, Video’s) Yoga Mats, Blankets and Props Healing Teas Crystal and Brass Singing Bowl (Wide Variety) About the Director of The Soul Center Yoga – Satya VanderKloot Satya has studied the sacred science of Kundalini Yoga, as taught by Yogi Bhajan, since 1990, healing a serious personal injury through this ancient tradition. coque iphone xr She is an internationally certified Kundalini Yoga teacher, a certified healer in the Sat Nam Rasayan Tradition, and holds a Masters degree in Psychology. She draws on these qualities and on her background as a professional athlete to make her classes reach the physical, mental, emotional, and spiritual levels. Satya’s Yoga classes are very meditative in nature, designed to gain strength, increase flexibility, promote healing, and deepen your spiritual practice. coque iphone 2019 pas cher The gong and crystal bowl meditation at the end of each class takes you into a state of deep relaxation. coque iphone x She teaches, “A Meditative Workshop for Heart Patients”, at UCLA for The California Heart Center Foundation. She has also taught, “Yoga and Meditation for Healing”, at Kaiser Hospital’s, Out Patient Facility. She specializes in working with people who are facing medical and physical challenges and has extensive experience working with people with Cancer. Satya has taught One-on-One Private Restorative Yoga and Meditation classes at Premiere Oncology. coque iphone xs max Satya also has taught Yoga and Meditation at Summit Malibu, a drug and alcohol addiction treatment program, where she works One-on-One with children and adults suffering from chemical dependency and related disorders. She also did vision and dream workshops there. coque iphone 8 Satya’s studio, The Soul Center Yoga, is located in West Hills, California, where she teaches group classes and gives private instruction to adults, children, and pregnant women with special needs.

Aimee’s practice in the teaching and healing arts began in Chicago as an English teacher and then as a school and community counselor after receiving her Master’s Degree in Human Services and Counseling. After moving to Los Angeles, she expanded her experiences by becoming a certified Kundalini Yoga teacher with Harijiwan and Tej from Golden Bridge as well as Guru Singh and Kia Miller from Yoga West. coque iphone 8 She is also a Master Level Reiki and Crystal Healer. Her yoga and healing sessions incorporate breath movement, mantra and meditation to get your radiant, creative, divine energy flowing through the blues and blocks. coque iphone 8 Aimee is grateful to share in the union of love and light with the finite and Infinite at House of Intuition. coque iphone 6 Reiki: Reiki is a healing technique where Universal Life Force Energy is shared through hands-on treatment. coque iphone xs max It helps remove energetic blocks within the mind, body and spirit promoting wellness and harmony within and throughout your life. acheter coque iphone en ligne Kundalini: Kundalini Yoga incorporates asana (postures), pranayam (breathing), mantra (sound) and meditation in order to energize and awaken the Divine, Creative Energy within. This Universal Energy clears the pathway of the chakras thereby making space for all that benefits your Higher Self. coque iphone soldes It breaks through the blocks, thought patterns and habits that limit you so that you can fully embrace your Truth and rewrite your Destiny.

Pam is a physician turned Kundalini yoga teacher at the cozy West studio. Her classes are infused with humor, joy and integrity aimed at creating a flow of energy. Perhaps the best part of the class is the way she guides the beautiful chanting to close the class. You will leave with a smile.

Mama, founder and co-owner of VIRAYOGA, and co-author of Art of Attention, Elena has taught yoga for 16+ years. After graduating from Cornell University in 1992 with a design degree, she worked as a textile and apparel designer for 6 years, and has studied with master yoga teachers for over 10 years. Through her teaching, influenced by several traditions including alignment-based Hatha and Kundalini yoga, Elena offers yoga as a way to approach our world with realistic reverence and gratitude. Her classes are a masterful, candid blend of artful alignment and attention cues for your body, mind and heart.

From the Museum of Modern Art to the Great Lawn at Central Park, from the playa at Burning Man to the Eiffel Tower, Elena is honoured to offer larger-scale experiences of yoga, but her true service is in shifting awareness within the smallest interactions; one family, one household at a time. As a coach with the Handel Group, she coaches individuals and teaches courses, and she’s been featured in the New York Times, Yoga Journal, Element Yoga for Beginners DVDs, ABC News and NBC News. Dozens of yoga practices with Elena can be found on Yogaglo.

As the Executive Producer of On Meditation, she is curating a project about the relevance of meditation and its benefits. The first limited-edition printing of her first book, Art of Attention, co-authored with Erica Jago, was released in December 2012 and sold out within a few weeks; Art of Attention’s second edition was released in March 2013.

Along with her own writings, Elena contributes to Yoga Journal, Yoga International, Huffington Post, CrazySexyLife, Positively Positive, The Chalkboard Mag, TheDailyLove, and Elephant Journal, and is an original board member of YogaEarth. Elena is also a Beauty Ecologist with Pangea Organics, part of the movement to bring organic, all-natural beauty care products to millions of households worldwide. 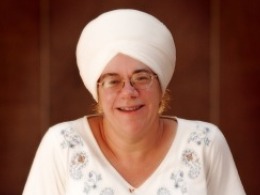 Nine Treasures Yoga was founded by Tej Kaur Khalsa, a longtime teacher of Kundalini yoga and a student of Yogi Bhajan for over three decades. Tej is the Custodian of the Archives of the Teachings of Yogi Bhajan, and a recognized authority on the teachings.

Guru Singh teaches conscious living through the tools of Humanology, Kundalini yoga, meditation, and sacred sound. He was born in Seattle in 1945 into a yogic spiritual household to a artist father and musician mother. His teachings grew from an esoteric curiosity inspired by his family’s deep connection to the masters of India and the blessings of being ready when teachers appeared.

Paramahansa Yogananda was his first teacher. Guru Singh’s great-aunt met Yogananda in Calcutta in 1916 and travelled with him from India to America in 1919. She studied with and served him until his passing in 1952.

In January 1969, Guru Singh met Yogi Bhajan, a spiritual leader from northern India and master of Kundalini yoga. From that moment on Guru Singh has been studying and teaching Kundalini yoga and meditation, a science taught in India for over five thousand years. He has spread this ancient science with passion and a practical fusion of Eastern mysticism into Western pragmatism. 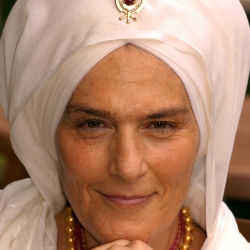 Gurmukh, 70, is the founder of the Golden Bridge Yoga. With centers in Los Angeles, Santa Monica, and New York City, Golden Bridge is the premier center for the study and practice of Kundalini Yoga and Meditation as taught by Yogi Bhajan. Since being baptized 43 years ago with the spiritual name meaning “one who helps people across the world ocean,” Gurmukh has dedicated her life to fulfilling her namesake. As the world’s leading Kundalini Yoga teacher, she and her husband Gurushabd travel worldwide, bringing this vast Technology and Teacher Training Programs to students globally in the U.S.A., Mexico, Europe, Russia, India, and South Africa. She is as well the creator and pioneer of The Khalsa Way Prenatal and Postnatal Teacher Training Program, now in its 30th year. Her daughter Wahe Guru Kaur, 29, works alongside her parents in fulfilling this Mission.