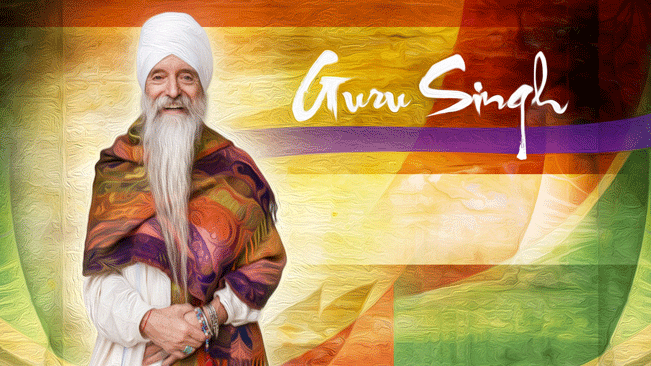 Guru Singh teaches conscious living through the tools of Humanology, Kundalini yoga, meditation, and sacred sound. He was born in Seattle in 1945 into a yogic spiritual household to a artist father and musician mother. His teachings grew from an esoteric curiosity inspired by his family’s deep connection to the masters of India and the blessings of being ready when teachers appeared.

Paramahansa Yogananda was his first teacher. Guru Singh’s great-aunt met Yogananda in Calcutta in 1916 and travelled with him from India to America in 1919. She studied with and served him until his passing in 1952.

In January 1969, Guru Singh met Yogi Bhajan, a spiritual leader from northern India and master of Kundalini yoga. From that moment on Guru Singh has been studying and teaching Kundalini yoga and meditation, a science taught in India for over five thousand years. He has spread this ancient science with passion and a practical fusion of Eastern mysticism into Western pragmatism.

“Awareness is not something that you do. coque iphone Awareness is life.” ~ Sadhguru Sadhguru, a yogi and profound mystic of our times,...

About Sadhguru Sadhguru, a yogi and profound mystic of our times, is a visionary humanitarian and a prominent spiritual leader. A contemporary...