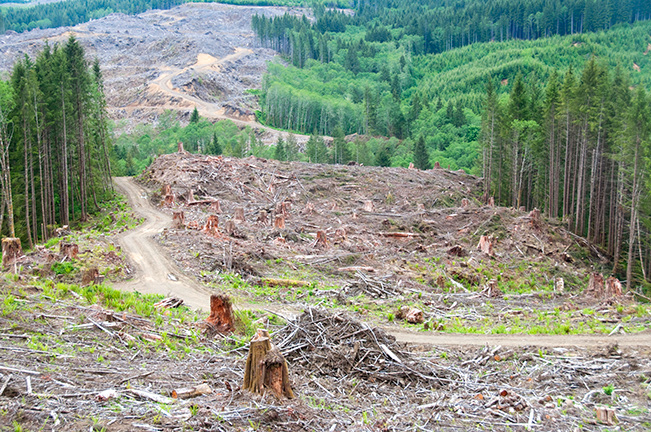 Deforestation – the loss or destruction of naturally occurring forests primarily due to human activity – is a growing problem throughout the globe with tremendous environmental and economic consequences.  Deforestation is primarily created by logging, cutting down trees for fuel, slash-and-burn agriculture, clearing land for livestock grazing, mining operations, oil extraction, dam building and urban sprawl. Logging alone, which in many cases is illegal, accounts for the loss of more than 32 million acres of natural forest every year according to The Nature Conservancy.

To imagine deforestation is quite tricky and to nail its patterns down is quite tricky. We know forests are shrinking, but knowing exactly where and by how much often means compiling locally reported data that can be shoddy, incomplete, or outdated according to University of Maryland geographer Matthew Hansen. Better data would be an invaluable tool for resource managers looking to preserve trees, and for climate scientists who want to crunch how much carbon they can store, Hansen realized. So he set about to create the most high-resolution map of global forests ever made, partnering with Google Earth to process some 650,000 images taken by NASA satellites over the last decade.

In the exclusive video above, Hansen takes us on a tour of his new maps and the startling situation they reveal. “It’s a big leap forward in terms of a set of facts, a set of observations on what this dynamic is,” Hansen said.

One of the next steps, Hansen said, is to use the data to gauge exactly what this deforestation means for climate change. Trees are one of the largest “sinks” for carbon dioxide; previous studies suggest forests absorb a third of the carbon released by burning fossil fuels.

Soil as Carbon Storehouse: New Weapon in Climate Fight? The degradation of soils from unsustainable agriculture and other development has released...