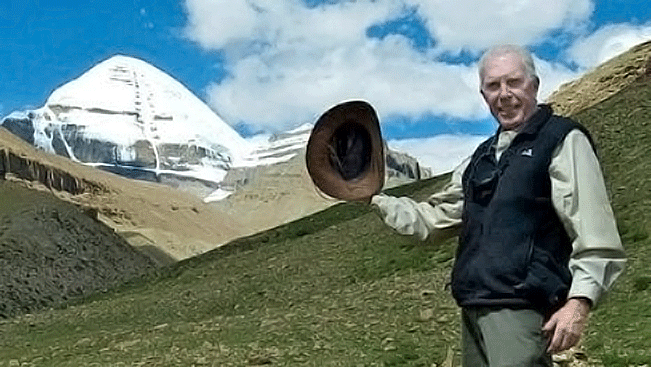 This piece from W. Brugh Joy, M.D. was written towards the end of his life in the fall of 2009.

“Unconditioned/Unconditional Love Transcends the Self and gives the Self the cohesiveness of a Center of Being that is Supernally Conscious of the vast and unpartitioned Whole, the Eternal Forces or the Holyland…the archetypal fixed that are universal, unchanging, concentrated in potency, that can, from time to time transcend the material forces of form and function. Within this Center of Self lie two other centers of Awareness. Although neither the Ego nor the Shadow are the same as the Awareness of the Self…they are intricately and intimately related to the Self and under its unfurling dynamic in Temporality. The Ego and Shadow are specialized and limited aspects of the Self and function primarily to engage the Three Pillars of Temporality…Mystery of Change….Mystery of Differences….Mystery of Creative Adaptation and unfoldment.

The Shadow is the Self’s reservoir of Unconsciously expressed aspects of the Self that operate to maintain the overall balance and intention of the Self in specific relationship to the Ego…of which the surface sense of self, the ego, is only part of the Ego. There is nothing in the Ego or the Shadow that determines whether or not the balancing forces of the Self are activated. The Self is the source and the implementer of both Ego and Shadow interaction. The Shadow must not integrate Ego. The Ego must not integrate Shadow. It is the Self…when both timing of maturation of developmental dynamics and the supporting forces of the Self are in alignment that will activate the dissolution of both the Ego and the Shadow into a full reflection of Itself.

The Shadow fulfills the wholeness of the Self….is modulated by the Self and only becomes a conscious part of self when the Self begins the Wholeing or Holy task of uniting Shadow and Ego ….a Soul Mystery of uncertain outcome. When the personality or ego begins to take charge of dreams and possesses the dynamics ….a mishandling of the Holy Forces occurs. Really…the ego is the witness to the Self/Ego/Shadow development.

To be re-emphasized….The Ego is not the source of the Shadow and the Shadow is not the source of Ego. The Shadow does not have to be made conscious to the Ego to effect its Holy Mission. The Ego does not have to be conscious to the Shadow to effect its Holy Mission. Both Ego and Shadow are completely under the egis of the Self. The Shadow modulates…the Ego orients. The unconscious forces that make up the Ego and the Shadow are Transpersonal and Holy. They must not be appropriated by either the Ego or the Shadow and certainly not by the ego….the surface awareness.

Shadow formation is never a conscious process nor does it need to be made conscious. It functions best unconsciously….just as the forces of the Ego operate best unconsciously. The Shadow can live through an individual, a family, a clan, a tribe, a community, a nation, and all of Humanity as a function of the intrinsic nature of Temporality/Manifestation/Time/Space. It is a part of Divinity’s (Self’s) Homeostasis or the Holy Love mystery of Balance. It is innate to the Wholeness or Holiness of Self.

The Shadow, as a natural aspect of homeostasis, operates (erupts) from time to time in the life of the conscious self Ego or larger and larger group awareness as a surprise/shocking action, illness, accident, slips of tongue, nightmare dreams, and self-sabotaging, and as Evil or the Dark face of Divinity when the surface awareness is biased to positivity.

The Shadow operates in the unexpected miraculous and inspired action, healing, inexplicable knowing to avoid a potential destructive moment, truth saying without karma in conversation, spontaneous healing, restorational dreams, self-acceptance and self love, and finally as Self Realization of the Beauty of God when the surface awareness (Conscious Ego) is biased to negativity.

The Ego is not the primary center of Awareness….the Self is.

The Shadow is not the primary center of awareness…the Self is.

The ego is the reflecting witness.

The unfoldment of a life is driven by the unconscious dynamics between Self…the Shadow…and the Ego. What the ego is aware of is mostly socialization attitudes, biases, preferences, and filtered perceptions.

The Self is the only responsible agent for the entire mystery of one’s life. Free will of the Shadow or of the Ego is an illusion generated out of a limited awareness. When witnessing the Divine Play of one’s Life…best not to appropriate any of what is seen, revealed, or experienced as personal.

The Self, The Ego, and The Shadow operate in time and out of time. The ego operates almost exclusively in time. The Ego is the chief organ of Temporal Awareness.

The Self….the Deepest Divine Mystery…may or may not elect to become conscious to the Ego.

The most fundamental Realization is that consciousness or light is an aberrant and fundamentally temporary phenomenon of darkness to handle motion and change. Light and consciousness are both mostly interferences and most rarely a witness and handmaiden to the action of Self. Ego Consciousness is the carrier of the Soul’s incarnation into a specific time and a specific place. It is an interference of wholeness because it is differentiating and discerning. The Shadow is the Ego’s counterpart reflecting the Ego’s unconscious complements and vice versa. Gestation is the great principle of Darkness.”…W. Brugh Joy, M.D.

What’s Love Got To Do With It?

Wishing You A Happily Ever After – Char Margolis

Imagine your life is a play. You are the star of the show. coque iphone 6 You are also the director looking down and watching all the characters...