Mount Shasta located in Northern California is renowned for its spiritual and mystical qualities. It is a destination for mystics, gurus, sages and curious people from all over the world. Unexplained stories of miracles and spiritual occurrences are endless. This enormous mountain is endeared by all who come to visit or live near her. This dormant volcano is not part of any mountain range. She’s uniquely her own mountain in many ways. With a summit of 14,125 feet above sea level, Shasta is the second highest peak in the Cascade Mountain range. Her slopes rise abruptly nearly 10,000 feet above the surrounding landscape.

Those who live in Mount Shasta the small town located on the base of the mountain, will tell you stories of encounters with beings from other times, galaxies and planets. The most common encounters involve beings who do not currently have a human body, including Saint Germain, The White Brotherhood, Lemurians, the hidden city of Telos,and alien landings. But, by far they sense a certain special feeling that comes with being in the presence of Mt Shasta’s spiritual vortex energy. Our ancient ancestors knew a vortex or a gathering place of the earth’s energy was sacred. This special mountain has such a vortex. Ancient cultures considered these vortexes, portals to a higher dimension of consciousness.

If someone was near a vortex it activated and energized their etheric or energetic bodies making it possible for some to become aware of what mystics have discovered…our existence is multi-dimensional. Mount Shasta as well as Sedona, Arizona contain vortexes the average person is able to feel and sense.

Poet Joaquin Miller describes Shasta like this, “Lonely as God, and white as a winter moon, Mount Shasta starts up sudden and solitary from the heart of the great black forests of Northern California.” Native American Indians in the area profess that the mountain is the home of the spirit chief Skell who descended from heaven to the mountain’s summit.

There are many places to explore, places to stay, and services offering spiritual insights into Mt Shasta. The town of Mt Shasta is the base for most explorations. Enjoy this wonderful mystical mountain so close to Los Angeles.

Esalen. The word itself summons up tantalizing visions of adventure, of unexplored frontiers, of human possibilities yet to be realized. There is the wonder of the place itself, 120 acres of fertile land carved out between mountain and ocean, blessed by a cascading canyon stream and hot mineral springs gushing out of a seaside cliff. There is the delicate and subtle Big Sur air of a late afternoon in May, the midnight mist of July, and the drenching February rain. There are October nights so clear the Milky Way can light your walk along the darkened garden path. And always there is the sound of the sea.

And then there are the people — the people who live there and love the land, and the 750,000 more who have come from all over the world to participate in Esalen’s 50-year-long Olympics of the mind, heart, body, spirit, and community, committing themselves not so much to “stronger, faster, higher” as to deeper, richer, more enduring in the fellowship of other seekers.

They come for the intellectual freedom to consider systems of thought and feeling that lie beyond the constraints of societal norms. They come to re-discover ancient wisdoms in the rhythms and tides of the body, and poetry in the pulsing of life itself. They come to rediscover the miracle of self-aware consciousness. Often they come away inspired by a fierce desire to learn and keep on learning through all of life, and beyond.

Esalen is a place with a global reach. In the words of Thomas Wolfe about America, It is a place where miracles not only happen, but where they happen all the time.

Deepak Chopra, M.D. and David Simon, M.D. opened the Chopra Center for Wellbeing in 1996 to help people experience physical healing, emotional freedom, and higher states of consciousness. Located in Carlsbad, California, we offer a wide variety of programs, retreats, and teacher training programs that integrate the healing arts of the East with the best in modern Western medicine. Our goal is to guide our guests in timeless tools and healing principles that they can use to nurture their own health, restore balance, and create greater joy and fulfillment in their lives.

With locations in LA, Santa Monica and New York, Golden Bridge is a community dedicated to the cultivation of consciousness, with the belief that “happiness is the birth right of every human being”. From the moment you step through our doors, you implicitly understand that very first principal of the teachings.

Golden Bridge offers over 100 classes per week taught by highly experienced teachers. In addition, we offer numerous workshops, special events and teachers trainings. Together these provide students the opportunity to deepen their practice and further their understanding of various spiritual teachings.

Golden Bridge is a community dedicated to the cultivation of consciousness, with the belief that “happiness is the birth right of every human being”. From the moment you step through our doors, you implicitly understand that very first principal of the teachings.

The question at hand is whether there is such a thing as higher consciousness? We are using the term “cosmic consciousness” to denote a state of awareness that knows itself completely, a state of inner silence that is in direct contact with existence. Such a state would be free, without suffering or limitation. If there is such a state, then human evolution has a goal to aim for one that is natural and credible rather than supernatural and faith-based.

As scientific evidence, we began with the quantum vacuum, which is the source of everything that’s deemed “material,” from atoms to galaxies. In everyday usage a vacuum implies total emptiness, but the quantum vacuum is the origin and the end place of our universe, and possibly countless others. In fact, standard quantum field theory gives us an estimate of the mass-energy density of the quantum vacuum: a cubic centimeter of empty space (about the size of the tip of your finger) contains about 10 32 more mass energy-density than all visible matter in the universe! (That’s 1 followed by 32 zeroes, which more energy than all the trillion or so of all luminous galaxies in the observable universe.)

At the source, “quantum foam” is constantly bubbling up to produce everything in creation, here and now. Which means that the quantum revolution that began more than a century ago has effectively overthrown the common-sense notion of matter as something solid, tangible, and reliable. By implication, everything we associate with matter – the sight, sound, touch, taste, and smell of “material” things – has also been overthrown. If that seems radical, quantum theory goes further and dispatches time and space as constant, reliable aspects of reality. They, too, emerge from the “nothingness” of the quantum vacuum.

Why should this matter in everyday life? Because mystics have pointed to a reality that transcends this world, and so does modern physics. It is tantalizing that two world views are compatible, both contending that the source of time, space, matter, and energy doesn’t contain time, space, matter, and energy. It lies beyond them, in an inconceivable somewhere that has no location; it’s not a “place” in any common-sense use of the word. Let’s see how deep this agreement goes.

Not only is the quantum vacuum the source and resting place of countless particles (and through them perhaps countless universes). It contains all potentialities of existence, everything we can, and cannot, imagine. The world’s spiritual traditions say the same of God, the Absolute, or what we prefer to call cosmic consciousness. The terminology isn’t important, only the concept of mind preceding matter. Your mind is filled with invisible potential. It contains every word you know and every possible sentence that you might choose to put in words. Even though you speak or think only one word at a time, the number of potential sentences you can make is essentially infinite.

In the quantum model, the space-time continuum contains by far the tiniest of possible energies, since at its foundation resides the quantum foam, where space and time don’t even make sense. The quantum foam contains at least six other dimensions predicted by superstring theory. These emerge but never fully develop into macroscopic scales, as do regular three-dimensional space and one-dimensional time.

Suggested by: Fredda
Retrieved from:
http://www.sfgate.com/opinion/chopra/article/What-Is-Cosmic-Consciousness-The-Quest-for-5178005.php#src%3Dfb 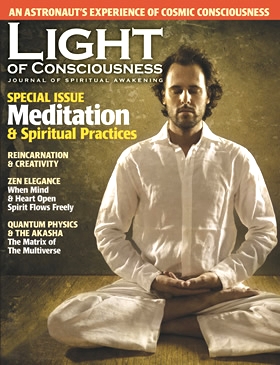 y the grace or mercy of God, we have been given the faculty of distinguishing what is real and what is unreal, what is permanent or changeful, what is proper or improper. This capacity takes us out of the rut of circular, mechanical thinking, beyond intellectual understanding to insight. The first step is to watch your thoughts. You may not be able to do this during work or in busy times, at least not in the beginning. But as you proceed with silent contemplation or meditation ask yourself, “Is this thought permanent or transitory, real or unreal?” by Swami Amar Jyoti

A complimentary digital edition is here! To read your copy of Light of Consciousness magazine, please follow the instructions below.
Computer viewing: no login is required, click HERE