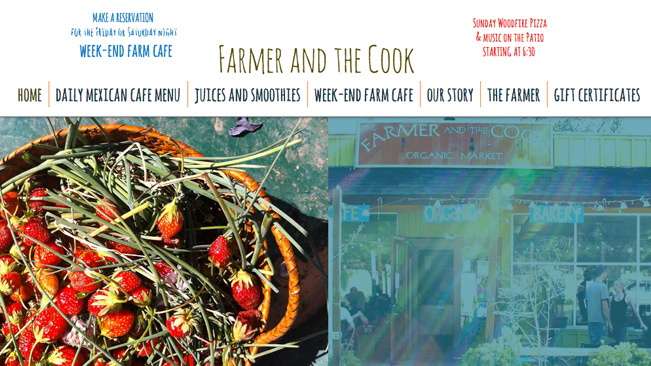 the cook I became amazed by the experience of a simple meal in a beautiful setting, when I was an 18 year old exchange student in Mexico. How could tortillas, beans and coleslaw on the beach in San Blas taste so good? That was the local, organic and scratch cooked food of the 70’s. I went to college for a masters in nutrition all the while avoiding my destiny as a cook. I wanted to be bona-fide, I wanted to have a profession. coque iphone 6 After eating well in San Francisco and Seattle, I had the guts to follow my passion and I returned home to Ojai and opened the City Bakery-Cafe in Ventura in 1988. I was running the bakery in Ventura and bought organic vegetables from Steve at the Ventura farmers market. I visited his farm in Carpinteria and remember saying to him, “Wouldn’t it be great to have a restaurant on a farm?” We were both married to other people at the time, but a decade later, when we were both divorced, we fell in love at the Ojai farmers market, this time while buying kabocha squash. On a trip to San Francisco we bought this now much despised 7 dollar organic tomato and thought if we had both a farm and a store we could save people a lot of money… coque iphone en ligne it took us 9 years to make any ourselves, but that is ok because we are dreamers and we’ve had alot of laughs along the way. coque iphone soldes the farmer An adherent to the organic farming movement since the 1960s, I now farm on 12 acres (CCOF certified) in Ojai and now devote a lot of energy towards training farmers and consumer education. vente de coque iphone Four new organic farmers in our area formerly worked for me. coque iphone 8 The farm is an open resource and the CSA program includes a large number of volunteer harvesters, long-term and one-time participants. I am the president of the Ojai Center for Regenerative Agriculture and the former president of the Cornucopia Institute. coque iphone I attended Harvard College for only one year due to my innate curiosity. I have a degree in Literature from The University of California at Santa Barbara. I have been active in organic certification and public interest policy in Carpinteria at CCOF, as a Santa Barbara farmers market officer (P, VP) and board member, at the Texas Department of Agriculture, as a founder of the Organic Farmers Marketing Association (VP, T), as an associate editor at ACRES, USA (1998-2007), organic administrator and inspector for many private organizations in the US Midwest, even an FDA delegate to the UN/FAO Codex Alimentarius! I write and speak Spanish. My favorite color is white, favorite vegetable the cucumber, favorite book All Quiet on the Western Front, favorite film Dr. Strangelove.