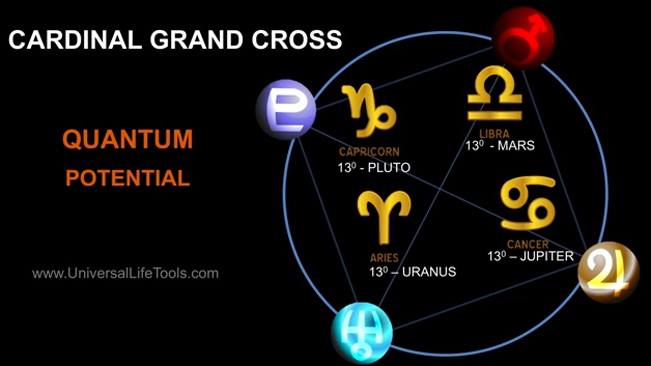 April 2014 heralds a very rare astrological event, where four planets (PLUTO opposing JUPITER & MARS opposing URANUS), are at exact 90 degree angles to one another, hence forming a Grand Cross in our celestial skies. soldes coque iphone 2019 In addition, each of these planets are sitting at ’13 degrees’ of the 4 CARDINAL signs (Pluto 13 degrees Capricorn, Jupiter 13 degrees Cancer, Mars 13 degrees Libra & Uranus 13 degrees Aries). Plus Mars is Retrograde (appearance of going backwards) during the Cardinal Grand Cross Alignment. coque iphone 2019 PLUS, adding to this melting pot of transformational energies, the climax of this Cardinal Grand Cross on the 23/24 April 2014 takes place between two eclipses; a Total Lunar Eclipse on the 14 April 2014 followed by a Solar Eclipse on the 28 April 2014. Hope you enjoy this slideshow summary of the energetic ‘Quantum Potential’ of the Cardinal Grand Cross of 2014. coque iphone soldes

For a more detailed understanding of this event and to receive a number of free energetic tools, please visit: https://www.youtube.com/redirect?q=http%3A%2F%2Fwww.universallifetools.com%2F2014%2F03%2Fcardinal-grand-cross-april-2014%2F&redir_token=cAhiLHK6P4AwsI6VTfbm0nVzxpN8MTM5ODU0MDYzOEAxMzk4NDU0MjM4 PLEASE NOTE: At the 3:40 minute mark, there is a typo in the heading on a few of the slides. coque iphone 6 The Annular Solar Eclipse is on the 29 April 2014 (not the 14/15 April, as that is the date of the Lunar Eclipse… coque iphone 2019 Ooops, apologies for any confusion).
Prev
More in this category
Next

“Mars is the force which propels the seed to germinate.” Dane Rudhyar In December 2013, Mars entered the sign of Libra where it remains until...