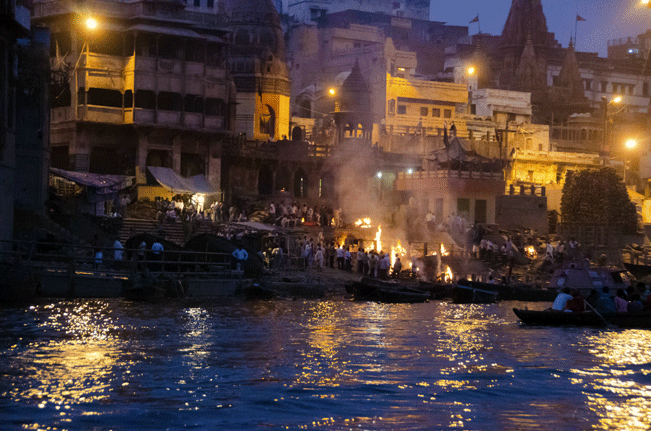 The beautiful Varanasi, India is the holiest of Hindu’s sacred cities. The oldest inhabited city in the world lies beside the sacred River Ganges, nestled between the River Asi, to the south and the River Varuna, to the north. The flourishing city of Varanasi is rich in history and ceremonious traditions. The riverfront plays host to Ghats, which are stone stairways leading to the river; eighty-four of them, in fact. Each of the Ghats is significant in its own way and many travelers take part in freeing themselves from sin by bathing in the sacred river.

Varanasi, which is said to have been founded by the God Shiva, is a city abundant with intricately designed temples, an array shrines, spiritual depth, and exquisite art. The city, often referred to as “the religious capital of India,” is populated with designers creating garments using muslin and silk fabrics, as well as perfumes, sculptures, and ivory keepsakes.

The history and sacred traditions of Varanasi are said to date back as far as 5,000 years. The area is lavished with a variety of religious beliefs; each encompassing their rituals and structures. Buddhism is marked by the Dhamek Stupa shrine, where it is said that the first sermon of Gautama Buddha was given. The followers of the Jain faith claim this area for worship and pilgrimage. Islamic sites are present in the area and date back as far as 1033 CE when the area was invaded and ruled by Muslims. In vast significance, the Hindu temples are effervescent in the area; after several periods of destruction by the Muslims, Varanasi rebuilt the temples, boasting its independence since the 18th century.

The Ghats of Varanasi are overlooked by temples, palaces, and shrines. Religious festivals and routine rituals are performed around and in these structures as well as along the riverfront. The Dashashwamedh Ghat is host to an evening worship called “Agni Pooja,” meaning Worship to Fire, which is performed by priests each night. This is a spiritual dedication to Shiva, sun, fire, and the universe. The cremation process, which takes place at various Ghats throughout

Varanasi is a symbol of spiritual release of the dead to the divinities; bringing them to a state of liberation. Many seek Varanasi when they are near death as it is said if you die in this sacred city you are released from reincarnation and are delivered from the aura surrounding you.

A traveler will not want to miss the opportunities to ride by boat along the River Ganges, especially at sun rise, to witness the splendor of spirituality taking place; walking along the Ghats and learning the meaning and life of each; wandering the side streets; and enjoying the view of the vibrant city from atop one of the many roof terraces in Varanasi.

Where to Stay in Varanasi, India: The Nadesar Palace  or Hotel Rivatas by Ideal http://www.rivatas.com

Psychics can be healers with a vision. In today’s world many people are seeking answers. Over the years I have given readings to people from...