Fredda Psaltis’ journey as an artist started in her hometown of NYC, attending Art Students League and NYU as a teenager. She later received her degree from Carnegie Mellon University in fine arts and Osaka University in Japan for traditional Japanese 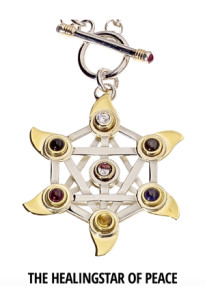 design. While studying jewelry design at CMU, she became part of the original team (William Benton and Joe Quigley) that came up with the original Mood Ring. Now propelled into the world of jewelry design, her life manifested “The Healingstar of Peace” – a metaphysical, energetic amulet based on the Kabbalistic Tree of Life and sacred geometry.

The beginnings of her spiritual and metaphysical journey were seeded early in life by her mother. She studied with the likes of Maslow and Huxley, discussing topics like the Essenes and Edgar Cayce with her as a child. Later in life she studied the Kabbala and Torah in the mystical city of Safed in Northern Israel. Living in the ancient Kabbalist/artist town was a journey through the matrix…there was no turning back now for her. That path led to Peru to study with the Shaman, high in the sacred mountains. This is where she was led to paint her visions from other worlds. From Peru her path led to the magical Eco community carved into the mountains in northern Italy called Damanhur. This was her first experience with a mystery school and intentional community.

Fredda now resides in the truly magical land of Sedona, Arizona. The breathtaking beauty of the Red Rocks and potent energy vortexes make this the perfect residence for a visionary painter. She is presently illustrating/painting a book for author Deborah Weed about the metaphysical journey of a snowflake.

Psaltis states, “My path has been rich with mystical experiences along the way. Synchronicity abounds, doors magically open, incredible people appear to guide me, and this is why I’m so inspired and honored to share some of those sources and people with you through this wonderful site.

Much love and blessings to you on your journey…” ~ Fredda