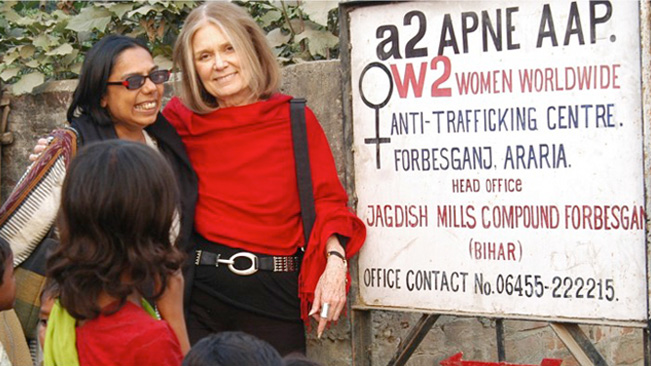 Prostitution is not a choice but an absence of choice based on gender, class, caste, ethnic and race inequalities that the sex industry exploits.

Ruchira Gupta is the Founder and President of Apne Aap Women Worldwide – a grassroots organization in India working to end sex trafficking by increasing choices for at-risk girls and women. She has striven over her 25 year career to highlight the link between trafficking and prostitution laws, and to lobby policy makers to shift blame from victims to perpetrators. She testified in the United States Senate before the passage of the Trafficking Victims Protection Act in 2000, and she lobbied with other activists at the United Nations during the formulations for the UN Protocol to Prevent, Suppress and Punish Trafficking in Persons — resulting in the first UN instrument to address demand for trafficking in Article 9. In 2009 Gupta won the Clinton Global Citizen Award and in 2007 , she won the Abolitionist Award at the UK House of Lords. In 2008 and 2009, Gupta addressed the UN General Assembly on human trafficking. soldes coque iphone She won an Emmy in 1997 for her work on the documentary “The Selling of Innocents,” which inspired the creation of Apne Aap. coque iphone xr Her work has been featured in 11 books including Half the Sky by Sheryl WuDunn and Nicholas Kristof. coque iphone Watch a Trailer for Ruchira’s Documentary – The Selling of Innocents

<
Prior to founding Apne Aap, Gupta worked in the United Nations in various capacities in 12 countries for over ten years. She is on the board of Coalition against Trafficking in Women and the advisory councils of the Polaris Project, Vital Voices, Ricky Martin Foundation, Asia Society, Nomi Network, The Coalition Against Trafficking in Women and Cents for Relief. coque iphone xs max In 2012 and 2013, she designed and taught courses on human trafficking for New York University’s School of Global Affairs. Apne Aap Women Worldwide Apne Aap Women Worldwide is a registered charitable trust in India. It is a grassroots Indian organization that works to empower girls and women to resist and end sex trafficking by organizing marginalized women and girls into small self-empowerment groups, where they work collectively to access their legal, social, economic, and political rights. Founded by twenty-two courageous women in prostitution, who had a vision for a world where no woman could be bought or sold, Apne Aap Women Worldwide is determined to make their vision a reality. The Movement In the past 12 years, Apne Aap has enrolled more than 21,142, at-risk and prostituted women and girls and their family members in 11 sites across India in its network. They have all gained different Assets reducing their risk or dependency to prostitution and found a voice to change laws and policies. Members of the Apne Aap network have successfully advocate for a new law, Section 370 I.P.C, on 3 April, 2013, against trafficking that has shifted the blame from the victim to the perpetrator. Our ten Assets are based on gaining the four most essential rights for at risk and trafficked girls and women: 1) legal protection, 2) education, 3) livelihood 4) housing. The girls and women of Apne Aap have now joined hands with rights-based movements linked to the four essential rights. We are part of India’s right to food, right to sustainable and dignified livelihood, right to land and housing, and right to education movements. In addition we actively participate in movements against the marginalization of low-caste people, denotified tribes and girls and women. We lead and join Dalit rallies, participate in DNT group organizing and are part of the anti-rape protests. The approach is to help the Last girl re-gain control of her destiny. The last girl is poor, female, low-caste, and a teenager. Additionally, she may be the daughter or sister of a prostituted woman or a victim of child marriage or domestic servitude. She is preyed on by traffickers because of her lack of choices and forms the “supply”. coque iphone 2019 pas cher Traffickers and Clients/Johns who buy and sell these girls form the “demand.” Our approach simultaneously tackles both the “supply side” and the “demand side”of the sex trafficking industry from the grassroots to the tree tops. Learn More about “The Organizing for Independence Concept” What Can I Do to Help? Apni Aap is bringing together clusters of SEGs to form networks with the capacity and numbers to advocate for their rights and for anti-sex trafficking policies at the national level. These networks will then join with women’s groups and other human rights groups to create a wave of change-makers determined to redirect the conversation from one of prostitute and pimp to that of victim and trafficker, and to propagate a new model for combating sex trafficking – one that focuses on giving women the tools needed to maintain their independence from the brothel system. Ultimately other sets of individuals, such as students, law enforcement officers, doctors, judges and religious organizations, will join our networks, creating a movement of people committed to changing attitudes worldwide so that it is never acceptable to buy another human being. They seek to bring together 500,000 people to lead this large-scale movement in the next five years. They encourage partner organizations and individuals to implement their campaign model and to help them lead the movement to end sex trafficking. Contact Development@apneaap.org for opportunities to join the movement. Volunteer Volunteer in India For volunteer opportunities in our Delhi office, check out our internship listings. coque iphone x Volunteer in the US Apne Aap International accepts volunteers for operations in its New York City office on a rolling basis. If you are interested in donating your time and skill set, contact development@apneaap.org Advocate One of the most important steps in raising awareness on any issue is to simply talk about it. Online, you can use Twitter and Facebook to spread the word about Apne Aap and our work by sharing Apne Aap’s tweets and status updates. coque iphone 8 Speak up to change attitudes towards girls, women and the sex trade. The next time someone uses the word ‘pimp’ or ‘ho,’ help them understand what they are really talking about. Stop supporting musicians who spread harmful attitudes by glorifying violence against women. These words and songs represent an entire culture of violence against girls and women, and you can demand an end to it. Join a Campus Coalition (USA) Apne Aap is now seeking university Campus Coalition members who will stand with us in our fight against a world where women and children are bought and sold. Our student coalition members will assist Apne Aap by promoting our campaigns, raising awareness domestically on key international issues, and engaging students through film screenings. All interested candidates are requested to send a 200-word statement to Development@apneaap.org, answering the following questions: What does this issue mean to you or to your particular campus organization? What local or global contribution do you feel your organization could make? As a Campus Coalition member, how will you engage and educate your student body on these issues? Request a Speaker USA: Development@apneaap.org /India: Executiveassistant@apneaap.org Fundraise There are many creative ways to fundraise for Apne Aap! People from around the world are already doing it. Check out some of these great ideas: