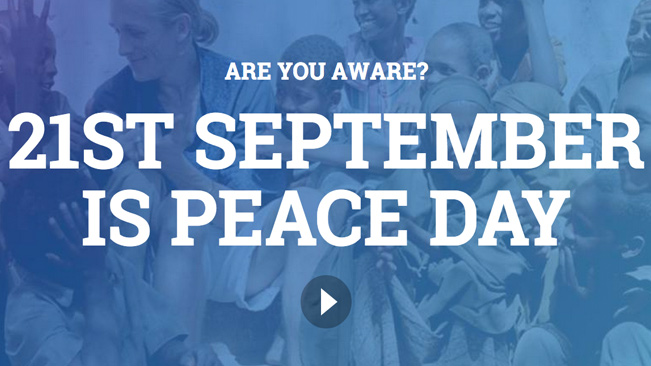 Jeremy Gilley is an actor turned filmmaker, who in the late 1990s became preoccupied with questions about the fundamental nature of humanity and the issue of peace. He decided to explore these through the medium of film, and specifically, to create a documentary following his campaign to establish an annual day of ceasefire and non-violence. In 1999, Jeremy founded Peace One Day, a non-profit organisation, and in 2001 Peace One Day’s efforts were rewarded when the member states of the United Nations unanimously adopted the first ever annual day of global ceasefire and non-violence on 21 September – Peace Day. Peace One Day’s objective is to institutionalise Peace Day 21 September, making it a day that is self-sustaining, an annual day of global unity, a day of intercultural cooperation on a scale that humanity has never known. SEE THE FILM: http://www.peaceoneday.org/film-overview To support this goal, and inspired by a 70% recorded reduction in violent incidents on Peace Day 2008 in Afghanistan (source: United Nations Department of Safety and Security), Jeremy launched series of Peace One Day coalitions, each with a lead partner: the NGO Coalition; the ‘Reducing Domestic Violence’ Coalition; the Student Coalition; the Faith Coalition; the Media Coalition; the Corporate Coalition; and the Schools’ Network. coque iphone pas cher In 2012 Jeremy approached global consultancy firm McKinsey & Company to support Peace One Day in analysing the results of Peace Day that year. coque iphone xs max This process resulted in a report that found, across the world, approximately 280 million people in 198 countries were aware of Peace Day 2012. coque iphone 8 For Peace Day 2013, due to activation on the day by every sector of society around the world, McKinsey & Company recorded a 68% increase in the number of those aware of the day – that’s 470 million people. Of that number, approximately 1-2% (4-8 million) behaved more peacefully in their own lives as a result, improving the world for thousands of others. coque iphone x Progress in 2013 has created a solid foundation for taking the message of Peace Day to 1.5 billion people in 2014 and to 3 billion people by Peace Day 2016. Through our own initiatives and collaborations with various parties, Peace One Day continues to encourage organisations and individuals take specific actions to reduce violence around the theme: Who Will You Make Peace With? In 2014, due to the generous support of the Howard G. Buffett Foundation, Peace One Day has launched a 3-year project in the Democratic Republic of Congo (DRC) and the Great Lakes region of Africa for Peace Day, 21 September. soldes coque iphone The goal of project is to raise awareness of Peace Day and encourage all sectors of society in the region to stand together in the name of peace on 21 September. We hope to see a significant, measurable reduction in violence in the region on Peace Day by 2016 at the latest. Peace One Day is impartial and independent of any government, political persuasion, corporation or religious creed.

Pema Chodron is a beloved Buddhist teacher, author, nun and mother who has inspired millions of people from around the world who have been touched...