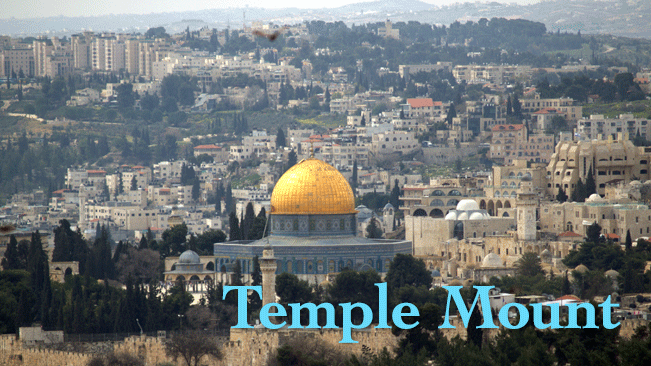 Despite political and religious unrest between Israel and Palestine for over 60 years, they agree on one thing – the Temple Mount in the Old City of Jerusalem is a sacred space and must be spared from destruction due to their ongoing wars. Temple Mount, on Mount Moriah, is one of the most hallowed religious sites in the Old City of Jerusalem and is considered a holy site for several different religions. Judaism, Christianity and Islam all assign special, sacred meaning. Accordingly, Temple Mount is also highly contested as to its exact relevance by each. The Jewish faith considers Temple Mount (Mount Moriah) to be the place where God chose the Divine Presence to rest. According to Rabbi sages and the Talmud, from here the world as we know it expanded into its current form and also God gathered the dust to create the first man – Adam. Christianity believes the Temple had a tremendous role in the life of Jesus. It was at the Temple that Jesus was found and he confounded the Jewish theologians with his knowledge of the Torah. Jesus was said to have propehsized the Temple’s destruction, which happened in AD 70. During the Byzantine era, Jerusalem was a place Christians would pilgrimage to by the tens of thousands to experience the place where Jesus walked. Sunni Muslims consider the Mount to be the third holiest site in Islam. Thought of as the Noble Sanctuary, this is considered to be the location of Muhammad’s journey to Jerusalem an ascent to heaven. The Mount is also associated with Jewish biblical prophets that are also venerated in Islam. Temple Mount itself encompasses about 100 different structures from various time periods, such as great works of art, Muslim prayer spots, ached porticos, Muslim religious schools, minarets, and fountains (for both drinking and to wash up before prayer). Beneath the present-day Mount are also substructures, the most well known and largest of which being ‘Solomon’s stables’. Highlights include: • The Western Wall (also known as the ‘Wailing Wall) – One of the four remaining walls surrounding Temple Mount that has been a site for Jewish prayer and pilgrimage. The sages state that anyone who prays in the Temple in Jerusalem, “it is as if he has prayed before the throne of glory because the gate of heaven is situated there and it is open to hear prayer” • Dome of the Rock – One of the most outstanding architectural accomplishments in the world and the third holiest place in all of Islam. coque iphone It currently sits in the middle, occupying or close to the area where the Bible mandates the Holy Temple be rebuilt.According to Muslim legend, the Prophet Muhammad ascended from here into heaven and met all the prophets that had preceded him, as well as seeing God sitting on His throne surrounded by angels. coque iphone 2019 • Kas Fountain – Muslims perform ritual ceremonial self-washings before entering the holy sites. The Muslim community of Jerusalem has managed the city since the Crusades, without interruption. Yet Temple Mount is part of the Old City, controlled by Israel since 1967. Both Israel and Palestine claim sovereignty over it and it remains a major source of conflict. As such, freedom to visit the site for all faiths is upheld by law, but for those of the Jewish faith, it’s a touchy subject. soldes coque iphone The Israeli government enforces a controversial ban on prayer by non-Muslim visitors. coque iphone 8 Arabs may only enter through one of ten specific, Muslim-only gates in the Old City. coque iphone xs max Today, both Muslims and those of the Jewish faith share responsibility for its safety and preservation – the Islamic community manages the site and Israel provides security. Because of the sensitivity of the site, those of both the Jewish and Muslim faith must follow strict guidelines to times and places for visitation (best to check first if this applies).

Making Your Body Your Temple

Author: by Susanna Harwood Rubin Think of your body as the temple in which you do your spiritual practices. So instead of simply rolling out...

Author: Rabbi Pinchas Winston The topic of reincarnation sparks many questions and strong reactions. Sometimes the question is simply, “Is...