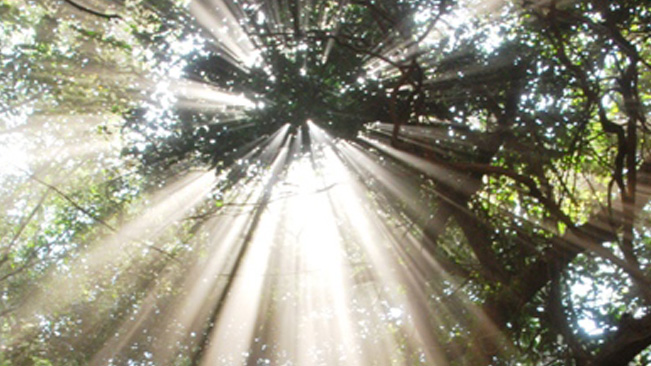 Johrei – Healing Illness Through Divine Light by Sara E. Morrow In a world where Western medicine still reigns supreme, it’s often that only when faced with a ‘terminal’ diagnosis we seek out alternative healing methods. Johrei Healing is one such method that’s defying the odds, making believers out of many a skeptic, with documented cases that even doctors cannot dispute. What is Johrei? Johrei is defined as the “purification of the spirit” — a healing practice that uses ‘divine light’ to dissolve spiritual impurities and eliminate toxins believed to be at the source of physical and psychological problems and diseases. Developed by Japanese healer Mokichi Okada in 1930, the practice of Johrei seeks to create ideal conditions here on earth, replacing sickness, poverty and strife with health, prosperity and peace. Johrei made it to America in 1953, now having several centers throughout the US. The Johrei healer serves as a channel for divine light, delivering it through the healer’s hand, reflecting the energy. It is thought that through this light, the sick or diseased part of the human body can be healed. The healer sits facing the client and uses the Johrei techniques to sense where the impurities and disease is located. Energies are focused around those areas, as well as directed at the client’s forehead and abdomen, both thought to be central points for cleansing. Next, the client sits facing away from the healer, with energy now focused on the crown of the head and shoulders. During this whole process, toxins are released from the body and replaced by Divine light. At the end of the session, client and healer face one another again and a prayer of gratitude is said. Johrei Healer Makoto Suzuki Makoto Suzuki is one of the top Johrei healers in the field and has helped countless patients, who were once at death’s door, to fully recover. Makoto and his wife, Marlene, live in Los Angeles, California and are credited with saving lives, one Johrei session at a time. For over 32 years, Makoto has been sharing his gift of Johrei healing with those in need. He met wife Marlene when she came to him after being diagnosed with a terminal illness and given only a few months to live – 20 years ago in 1994. coque iphone x Makoto’s Johrei healing saved her life, and she then dedicated it to helping others to have the same chance to survive. Upon arriving, the peaceful energy is tangible. Marlene welcomes you into their home, her energy warm and peaceful. Any apprehensions subside immediately. coque iphone 2019 On meeting Makoto, his unassuming presence is refreshing for a man with such healing power to give. Makoto is a second-generation Johrei healer, having grown up being trained by his father. soldes coque iphone His sensitivity and ability to harness divine light energy started at a young age. coque iphone 6 Even as an infant in his mother’s womb, Makoto was receiving healing light from his father’s Johrei practice, from his conception onward. However, it wouldn’t be until age 20 when he began using his gifts. According to Makoto, the light comes through him from the divine, therefore not draining his own life source, but enhancing it. The Makotos generally see clients who are on the edge of death and quite ill. coque iphone 6 Both Makoto and Marlene believe that their purpose and path in life is to heal, therefore they see patients on a very sliding scale — giving of themselves and asking little to nothing in return (though most who receive treatment do leave a donation, if they can). People come from all over the US and are able to stay in a small cottage on the Suzuki’s grounds. Survivors Marlene says she and Makoto have treated over 400 people in the last 20 years, with a high success rate – and has many testimonials to back it up. coque iphone 2019 One such case is Laurie MacCaskill, who knows first hand the incredible powers of Johrei and the dedication and care with which the Suzukis practice this ancient healing spiritual technique. MacCaskill was diagnosed with terminal Pancreatic cancer and given 4-6 months to live. She had come to terms with her impending death, yet thought she’d give Johrei a try – she had nothing to lose. And what she would ultimately gain? Her life – an option she and her Western medicine doctors thought never possible. Since being treated by the Suzukis, her cancer is in remission and Laurie no longer needs chemotherapy. In a testimonial she states: “I feel great. I have energy, vitality and they have kept me disease free and I have a great quality of life.” Deeply grateful and hoping to help others in need, MacCaskill goes on, saying: “For anyone that is experiencing a challenge with any kind of disease or difficult situation, I highly recommend seeing the Suzukis. It’s a positive, pain free experience and they are truly loving and giving people.