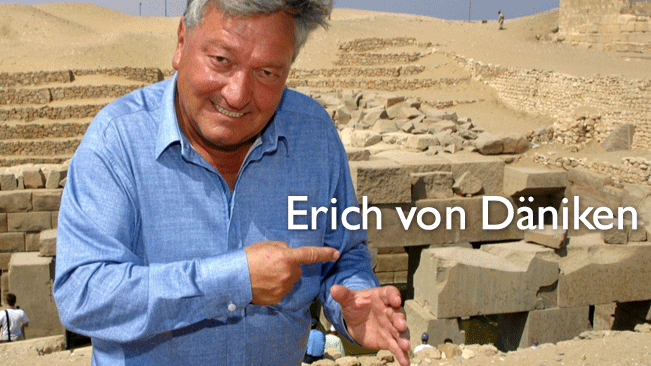 Born on April 14th, 1935, in Zofingen, Switzerland, Erich von Däniken was educated at the College St-Michel in Fribourg, where already as a student he occupied his time with the study of the ancient holy writings. While managing director of a Swiss 5-Star Hotel, he wrote his first book, Chariots of the Gods, which was an immediate bestseller in the United States, Germany, and later in 38 other countries. In the United States, Erich von Däniken won instant fame as a result of the television special “In Search of Ancient Astronauts,” based upon his first book. In 1993, the German television station SAT-1 started a twenty-five part TV series with and by Erich von Däniken, entitled “Auf den Spuren der All-Mächtigen” (Pathways of the Gods). In 1996, the American TV company ABC/Kane produced a one-hour special, filmed all over the world, entitled Chariots of the Gods – The Mysteries Continue. This film was broadcast on the ABC network on September 26th 1996. In 1996/97 ABC/Kane produced another documentary with Erich von Däniken (seen on the Discovery Channel). In Germany, the biggest TV network, RTL, showed the film on November 26th, 1996. coque iphone 8 7.7 million viewers in Germany alone watched the program. Erich von Däniken’s latest book just translated and now published is: Remnants of the Gods. Many things exist in our prehistory, about which we do not have the faintest idea. Stone structures erected by master builders, mysterious underground complexes etc. acheter coque iphone Erich von Däniken’s publications are available from legendarytimesbooks.com, the online bookstore of his international research association A.A.S. coque iphone xs max R.A. / legendarytimes.com. Erich von Däniken’s books have been translated into 32 languages, and have sold 63 million copies worldwide. From his books two full-length documentary films have been produced: Chariots of the Gods and Messages of the Gods. Of the more than 3,000 lectures which Erich von Däniken has given in 25 countries, over 500 were presented at universities. Fluent in four languages, Erich von Däniken is an avid researcher and a compulsive traveller, averaging 100’000 miles each year to remote spots of the Earth. This enables him to closely examine the phenomena about which he writes. Today, Erich von Däniken lives in the small mountain-village of Beatenberg in Switzerland (40 miles from Berne, above the city of Interlaken). In 2003 the “Mysteries of the World Theme Park”, the Mystery Park, initialized by Erich von Däniken opened in Interlaken, Switzerland. A platform for the presentation and research of the mysteries of the world, including Paleo-SETI, the so called Ancient Astronaut Theory. 2009 the theme park changed its name from “Mystery Park” to “Jungfrau Park”. Airing in 2010, the ANCIENT ALIENS the documentation of the History channel started. coque iphone pas cher Season 3 of ANCIENT ALIENS – THE SERIES set to premiere SUMMER 2011 on the History Channel! So far, there have been two Seasons of ANCIENT ALIENS – THE SERIES, consisting of 22 hours of network television time! Season 1 featured six 2-hr episodes and Season 2 featured ten 1-hr episodes. In spring of 2011 the History Channel is producing another 15 parts for the extremely successful series Giorgio A. coque iphone soldes Tsoukalos of the Center for Ancient Astronaut Research and Publisher of Legendary Times Magazine served (and serves) as the series’ Consulting Producer. Season 1 and Season 2 are currently on reruns on the History Channel. In 1998, Erich von Däniken co-founded the Archaeology, Astronautics and SETI Research Association , A.A.S. R.A. which publishes the English journal Legendary Times™ reporting about the latest research in the Paleo-SETI field. Erich von Däniken has been married to Elisabeth Skaja since 1960. He has one daughter, Cornelia (born 1963), and two grandchildren. Von Däniken is a hobby-chef and a lover of Bordeaux wines. Erich von Däniken is a member of the Swiss writers association, the German writers association, and the International PEN-Club. He was awarded with an Honorary Doctorate degree by the “La Universidad Boliviana” (“Gral. coque iphone 6 Jose Ballivian, Doctor Honoris Causa: Trinidad, 12 de febrero de 1975″). [Image of Honorary Doctorate: front side and (with confirmations) back side.] He received the “Huesped Illustre” award from the cities of Ica and Nazca in Peru. coque iphone pas cher In Brazil he received the “Lourenço Filho” award in Gold and Platen, and in Germany he was awarded with the “Order of Gordon Bleu du Saint Esprit” (together with the German astronaut Ulf Merbold). In 2004 he was awarded with the “Explorers Festival” prize [Image: front side and (with explanations) back side.] . 2003: “Ideas Oscar” in Switzerland for Mysteries of the World Theme Park founder Erich von Däniken.