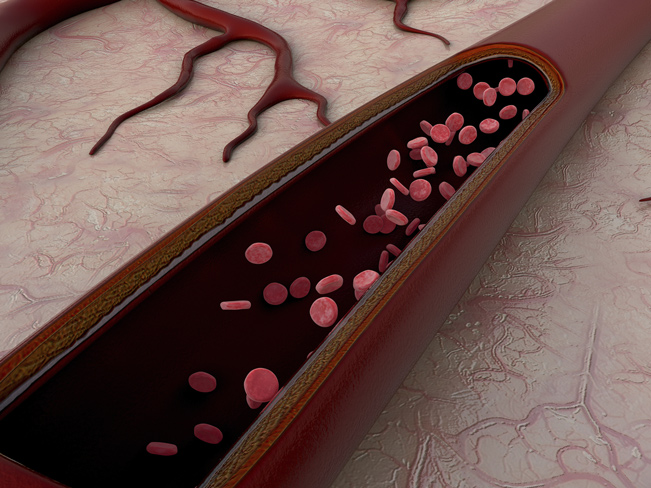 The endothelium, the cellular layer lining the body’s blood vessels, is extremely resilient.

It’s also extremely adaptable. In instances when the barrier must be physically breached to enable immune cells to reach various regions of the body to fight infection, the endothelium cooperates with leukocytes to create openings to provide the infection-fighting cells ready access to their targets. By and large, these ensuing “micro-wounds” are short-lived; as soon as the cells have crossed the endothelium, these pores and gaps quickly heal, restoring the system’s efficient barrier function. In cases when these gaps fail to close — and leakage occurs — the results can be devastating, leading to dramatic pathologies including sepsis and acute lung injury.

The mechanism underlying this highly intuitive capability has not been well understood. Now a research team led by Christopher V. Carman, PhD, of the Center for Vascular Biology Research at Beth Israel Deaconess Medical Center (BIDMC), using a combination of advanced fluorescence imaging and electron microscopy to monitor intracellular signaling dynamics, has amassed real-time information that shows that biomechanical signals are what sets this healing process in motion. Described in The Journal of Cell Biology, the new findings suggest that rather than structural robustness per se, the barrier function of the endothelium relies on an enormous self-restorative capacity.

“When people talk about biomechanics, they’re saying that cells are able to sense and respond to changes in force,” says Carman, who is also an Assistant Professor of Medicine at Harvard Medical School. “In other words, it’s not only hormones and chemical signals that influence cell behaviors. Cells can actually sense physical cues and thereby modulate their function.” Specifically, the new findings demonstrate that the endothelium senses an acute loss of preexisting isometric tension, and that downstream of this biomechanical signal, the ensuing recovery response generates reactive oxygen species (ROS), which are responsible for coordinating the micro-wound closure process.

Carman’s previous work explored precisely how leukocytes generate vascular micro-wounds in the first place, uncovering a novel endothelial piercing activity — “invasive podosomes” — that are generated by the leukocytes. In this new paper, he hypothesized an equally active role for the endothelium in closing the pores and gaps made by the leukocytes.

To test this hypothesis, his laboratory set up experimental models that mimicked acute, intense inflammation. Using dynamic time-lapse and high-resolution confocal microscopy, the investigators could see the process by which leukocytes were breaching the endothelial cell. In the course of a 10-minute span, they observed that a single endothelial cell tolerated the passage of at least seven leukocytes directly through its body, and that within this brief period, the gaps closed, leaving no sign of the pores.

“The cell’s restorative capacity was just so striking,” says Carman. “But these early investigations were still inadequate to tell us how the breaches were being closed. We had to dig down to the sub-cellular level to understand the underlying activities and the molecular signaling mechanisms that were orchestrating these activities.”

Subsequent experiments, led by co-first author Roberta Martinelli, PhD, revealed that in response to micrometer-scale disruptions caused by the transmigrating leukocytes, the endothelial cells were generating unique ventral lamellipodia structures, which were then migrating to the sites of the micro-wounds to close them up. “The ventral lamellipodia were responding to the sensation of an acute loss of preexisting isometric tension,” explains Martinelli, a senior scientist in the Carman laboratory, who compares the cell to a circus tent tethered in place by strategically placed ropes and stakes.

“If you cut one of the ropes holding up the tent, two things will happen,” she adds. “First the part of the tent that was under tension will undergo a recoil which will lead to a relaxation, leaving one part of the tent untethered and flapping in the breeze. At the same time, the remaining sets of ropes and stakes will have to bear the extra load. In the case of the endothelial cells, this translates to a force loading event.”

Existing studies have focused almost exclusively on force loading (physical pulling or tugging on cells) as response triggers. But by using new devices, the team was able to push, prod, stretch and unstretch cells in very specific ways.

“Our experiments told us that endothelial micro-wounding is actually a tension-loss signal [i.e. force unloading] and that this signal cued the recovery response,” adds Carman.

ROS are widely implicated in causing cellular, tissue and organ damage when present at excessive levels in the body. But, these findings show that low levels of these molecules — when produced in discrete locations within the cell — are highly protective.

“It’s tempting to speculate that excess ROS causes vascular breakdown by short-circuiting the recuperative response process and creating ‘white noise’ that dis-coordinates and disrupts micro-wound healing,” adds Carman. “It appears that we’ve got an essential homeostatic self-repair mechanism that is completely dependent on the generation of intracellular ROS, which is opposite to our typical thinking about ROS in cardiovascular health and disease.”

Adds William Aird, MD, PhD, Director of BIDMC’s Center for Vascular Biology Research, “These findings suggest a new way of thinking about how to deal with pathologic breakdown of the endothelial barrier. We know that a ‘leaky endothelium’ is a central part of the pathogenesis of a number of serious diseases, including sepsis, acute lung injury, and ischemic cardiovascular diseases, as well as chronic inflammatory conditions such as diabetes and arthritis. In addition to the presence of excessive barrier insults, it now appears that leakage can result when the endothelium loses its self-restorative capacity and its dynamic reserve to heal micro-wounds.”

The 12-step recovery model, created in 1939, is the most well-known and pervasive addiction/recovery program in the world with millions of practitioners...