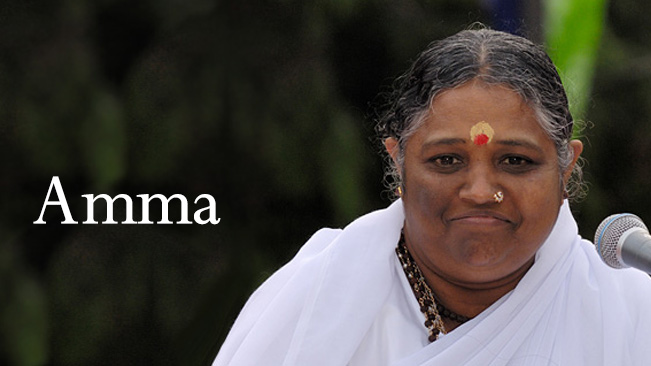 Mata Amritanandamayi was born in a remote coastal village in Kerala, South India in 1953. Mata Amritanandamayi is known throughout the world as Amma, or Mother, for her selfless love and compassion toward all beings. Her entire life has been dedicated to alleviating the pain of the poor, and those suffering physically and emotionally. coque iphone pas cher Throughout her life, Mata Amritanandamayi has embraced and comforted more than 34 million people. coque iphone 8 Amma inspires, uplifts, and transforms through her physical embrace, her spiritual wisdom and through her global charities, known as Embracing the World.® When asked where she gets the energy to help so many people, she answers: “Where there is true love, anything is effortless.” While Amma is widely regarded as one of India’s foremost spiritual leaders, Amma says that her religion is love. She has never asked anyone to change their religion but only to contemplate the essential principles of their own faith and to try to live accordingly. Even as a small girl, she drew attention with the many hours she spent in deep meditation on the seashore. She also composed devotional songs and could often be seen singing to the divine with heartfelt emotion. Despite her tender age, her compositions revealed remarkable depth and wisdom. When she was nine years old, her mother became ill, and Mata Amritanandamayi was withdrawn from school in order to help with household tasks and the care of her seven siblings. coque iphone pas cher As she went door-to-door gathering food scraps from neighbors for her family’s cows, she was confronted with the intense poverty and suffering that existed in her community, and in the world beyond it. Where Mata Amritanandamayi encountered people in need, she brought them food and clothing from her own home. coque iphone She was undeterred by the scolding and punishment she received from her family for doing so. Amma also began to spontaneously embrace people to comfort them in their sorrow. vente de coque iphone Responding to her affectionate care, they began to call her Amma (Mother). Amma was deeply affected by the profound suffering she witnessed. According to Hinduism, the suffering of the individual is due to his or her own karma — the results of actions performed in the past. coque iphone 7 Amma accepted this concept, but she refused to accept it as a justification for inaction. Amma contemplated the principle of karma until she revealed an even more profound truth, asking a question she continues to ask each of us today. “If it is one man’s karma to suffer, isn’t it our dharma (duty) to help ease his suffering and pain?” With this simple yet profound conviction — that each of us has a responsibility to lend a helping hand to those less fortunate — Amma moved forward with confidence in her life of service and compassionate care for all beings, uniquely expressed by the motherly embrace she offers to all who seek solace in her arms. coque iphone 8 In Amma’s community, however, it was not permissible for a 14-year-old girl to touch others, especially men. Amma explains, “In India, women are expected to remain in the background. It is said that ‘Even the walls should not hear them.’ My family could not understand my way of reaching out to people; they had no idea of the spiritual principles.” But despite adverse reactions, Amma followed her heart, later explaining, “A continuous stream of love flows from me to all of creation. This is my inborn nature. The duty of a doctor is to treat patients. In the same way, my duty is to console those who are suffering.” Amma says that love expressed is compassion, and compassion means accepting the needs and sorrows of others as one’s own.

Mother Meera has been called the “embodiment of the Divine Feminine”. coque iphone 8 Her gift to the world — free transmission of...