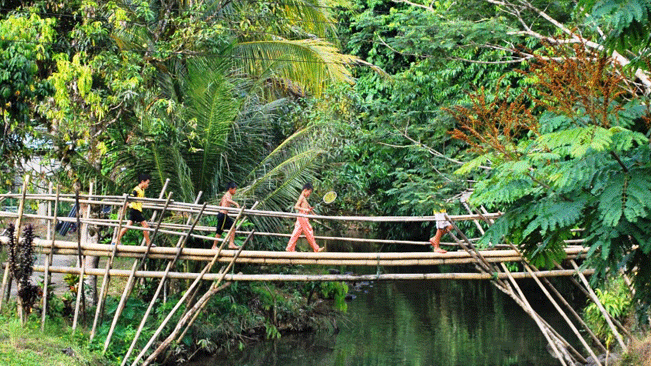 An excerpt by Wade Davis

Let me tell you a story that begins on a bridge in Borneo, close to dusk with thunder over the valley and the forest alive with the electrifying roar of black cicadas. I was sitting by a fire with an old friend, Asik Nyelit, headman of the Ubong River Penan, one of the last nomadic people.

The rains, which had pounded the forest all afternoon, had stopped and the light of a partial moon filtered through the branches of the canopy. Earlier in the day Asik had killed a barking deer. Its head roasted in the coals.

At one point Asik looked up from the fire, took notice of the moon and quietly asked me if it was true that people had actually journeyed there, only to return with baskets full of dirt. If that was all they had found, why had they bothered to go? How long had it taken, and what kind of transport had they had?

It was difficult to explain to a man who kindled fire with flint and whose total possessions amounted to a few ragged clothes, blowpipe and quiver of poisoned darts, rattan sleeping mat and basket, knife, axe, two dogs and three monkeys- a space program that had consumed the energy of a nation and, at a cost of nearly a trillion dollars, placed 12 men on the moon.

Or the fact that over the course of six missions, they had traveled 1.5 billion miles and indeed brought back nothing but rocks and lunar dust, 828 pounds altogether.

Asik’s question provoked the timeless answer. The true purpose of the space journeys, or at least their most profound and lasting consequence, lay not in wealth secured but in a vision realized, a shift in perspective that would change our lives forever.

The seminal moment came on Christmas Eve, 1968, when Apollo 8 emerged from the dark side of the moon to see rising over its surface not a sunrise but the Earth itself ascendant, a small and fragile planet, floating in the velvet void of space. This image more than any amount of scientific data showed us that our planet is a finite place, a single interactive sphere of life, a living organism composed of air, water, wind and soil. This revelation, only made possible by the brilliance of science, sparked a paradigm shift that people will be speaking about for the rest of history. Almost immediately we began to think in new ways. Just imagine. Thirty years ago simply getting people to stop throwing garbage out of a car window was a great environmental victory. No one spoke of the biosphere or biodiversity; now these terms are part of the vocabulary of school children.

Almost immediately we began to think in new ways. Just imagine. Thirty years ago simply getting people to stop throwing garbage out of a car window was a great environmental victory. No one spoke of the biosphere or biodiversity; now these terms are part of the vocabulary of school children.

Like a great wave of hope, this energy of illumination, made possible by the space program, spread everywhere. So many positive things have happened in the intervening years. In little more than a generation, women have gone from the kitchen to the boardroom, gay people from the closet to the altar, African Americans from the back door and the woodshed to the White House.

What’s not to love about a country and a world capable of such scientific genius, such cultural capacity for change and renewal?

Anthropologist and botanical explorer Wade Davis received his Ph.D. in ethnobotany from Harvard University. Mostly through the Harvard Botanical...

Anthropologist Wade Davis muses on the worldwide web of belief and ritual that makes us human. He shares breathtaking photos and stories of the...