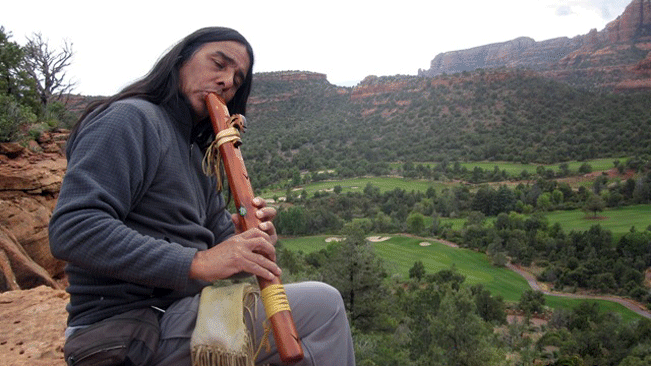 I have been here in Sedona the past 26 years arriving on the summer solstice of 1987.  It was a very exciting time to be in Sedona especially because of the Harmonic Convergence prophecy from the Toltec lord Quetzalcoatl for August of that year. By 1988, I began working as a vortex tour guide and eventually started my own company in 1990 as Sedona Nature Excursions with my specialty Mystic Tours.   I offer private shamanic healing sessions and astrological consultations.

During the 1990’s I worked with many people very eager to experience the energy of the Sedona red rock country and its famous vortex energies.  And this gave me the opportunity to develop my own unique way of teaching and sharing shamanic wisdom and healing methods while out in the beauty of the sacred landscape of Sedona.

My approach has combined wisdom teachings from both eastern yogic traditions, Christian mysticism and Native American shamanism.  I was especially drawn to the teachings of Toltec wisdom that has come out of Mexico, and to the practice of Kriya yoga.  Since I was already very deep into the practice of western astrology, I was able to merge this perspective into the teachings of the Medicine Wheel as taught to me by Sun Bear.

Artist and the Shaman Trailer

My Native Indian ancestry is via Mexico (although I was born in the Midwest of the United States where I grew up) and I recognize myself as an American born Toltec. My awakening to the shamanic path was preceded by a number of  mystical experiences I had beginning in my teenage years that jolted my reality.  And these types of experiences continued throughout my life where I had some profound encounters with Spirit Powers and intelligences from alternate realities.  At the age of 21, is when I was telepathically contacted by my ascended Master teacher and began my conscious journey onto the spiritual path.

Back in the late 70’s when I attended the College of Marin in northern California, I was involved as head of a Native American student organization that worked for public awareness to the issues of Native American political rights and land disputes, etc.  At that time this opened my eyes to the struggles of indigenous peoples throughout the Americas and the world.

Later while living on Maui, Hawaii, I pursued spiritual and metaphysical studies, and had experiences that facilitated my becoming a professional astrologer and mystic.  During that time I had a close encounter with a UFO that opened me to the presence and message of the Star people.  The Star people that contacted me are extraterrestrial /galactic human beings and are here to assist in this time of  changes we are going through even if they remain hidden to the public.

Since I was working as a spiritual guide, astrologer and healer, I was invited to be ordained as a minister into the Order of Melchizedek on Bell Rock in 1988 by the Reverend Dan Chesbro.  And since 2012 I am a legal member and medicine person of the Oklevueha Native American Church, as well as, the head of my own Native American church, ‘Toltec Sun Ministries’.  I conduct Native American style weddings, Sweat Lodges and blessing ceremonies, as well as share shamanic teachings and energetic practices including Medicine Wheel empowerments with sacred drum, flute, songs and chants.

My private shamanic healing sessions are designed to clear anxiety, stress, phobias, emotional and mental creative blocks, bringing healing and balance back into mind and body. Astrological consultations allow understanding of soul patterns as mapped in birth charts and insights into manifesting creative purpose in life via career, relationships and spiritual dynamics. I apply the use of various predictive methods and specialize in relocation astrology as seen in astrocartography and local space mapping.  Energetic movement and healing practices include tantric Kriya Yoga with Cobra breath and other special breathing modalities.

Lynn is a professional psychic medium. soldes coque iphone Lynn provides psychic readings and healings for your body, spirit or your space (home...